Catching Rainbows in the Storms of Life

(This one is for you, Uncle Jerry.)

Indiana summers are unpredictable. One year, a drought. The next, a deluge.

Life is kind of like that, too. Sometimes, we feel as if we’re in a desert. At other times, storms rage around us and we fear we may be drowning. But occasionally, when the sun is shining just right in our world, we get rainbows. 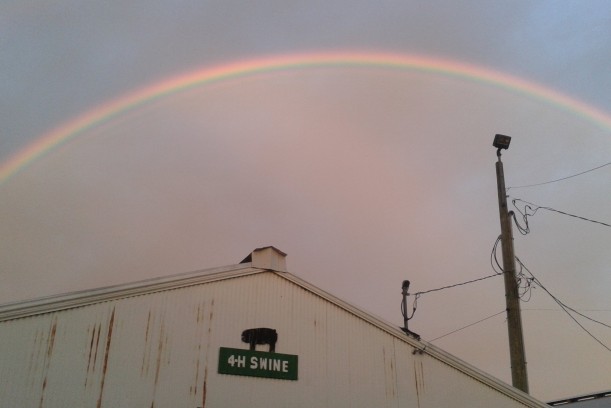 My husband and I joined friends and family at the edge of town last week to celebrate the beginning of our county’s 4-H Fair. As the crowd stepped outside following the queen contest, the entire fairgrounds was treated to a rare site — a glorious double rainbow. People stopped in their tracks and pointed to the vivid colors that seemed to begin at one end of the fairgrounds and end at the other. Across the fairgrounds at the rodeo, the action in the arena went unnoticed and fans in the stands let out a collective “ooooh” as the colors swept across the sky.

The rainbow was a welcomed site after a stretch of summer storms that have stunted farm crops and dampened vacation plans. I hadn’t seen one in quite a while and wanted to remind myself how God goes about creating such a miraculous display, so I turned to the shelves in our home library. A favorite “living” book that we used during our homeschooling years (USA Today’s Weather Book by Jack Williams) tells me the great scientist Isaac Newton determined that “rainbows appear in the sky when different colors are bent different amounts by a prism, such as a drop of water. It is this prism effect of water that explains how raindrops break white sunlight into the colors of the rainbow.”

Rainbows are formed, says Williams, “when raindrops reflect sunlight toward the observer, dispersing the light into colors. To see a rainbow, you must be standing with the sun at your back and rain must be falling in another part of the sky. No two people ever see exactly the same rainbow. Each observer views a different set of drops at a slightly different angle,” continues Williams. “In other words, each color you see is coming from different drops.”

So we all had our own, personal rainbows on that summer evening, depending on where we were standing. And the rainbows appeared because we had the sun at our backs during rainfall.

Thinking back to the evening we stood with our extended family, marveling at that rainbow, I realize these dear people have weathered their own storms recently. Illness, an auto accident, the death of a loved one, a faltering marriage, an unplanned pregnancy……enough rainfall for one family, and at times they’ve felt they are drowning.

There is still rain, but the sun is shining behind them and they’re enjoying a few personal rainbows. A beautiful wedding and a healthy newborn, both within a week, are rays of sunshine. And in this season of 4-H tradition, a Fair Queen and a Grand Champion calf in the family are unexpected rainbows.

In Genesis, a rainbow appears as a sign of a covenant between God and Noah after the Flood. The rainbow represents God’s mercy and this promise, “the waters shall no more become a flood to destroy all flesh.”

There are no guarantees against personal storms, but God has sent One who walks with us as we weather those storms and claim His promise:

“Whatever God has promised gets stamped with the Yes of Jesus. In him, this is what we preach and pray, the great Amen, God’s Yes and our Yes together, gloriously evident. God affirms us, making us a sure thing in Christ, putting his Yes within us. By his Spirit he has stamped us with his eternal pledge—a sure beginning of what he is destined to complete.” 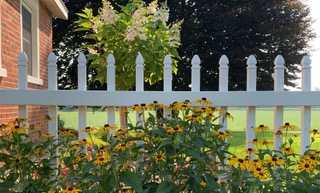 “The true secret of happiness lies in taking a genuine interest in all the details of daily life.” ~ William Morris

Join me in paying attention to the details.